In Memory of Michael Jessen

“I believe that we humans are beings created for ethical action, beings meant to step into the stream of human life and create causes, create effects, to be, to know, to love, and to do right in the human world.”

It is with profound sadness that his family announces the sudden and unexpected passing of local environmentalist and loving father and husband, Michael Jessen. The above quote is from a letter to the editor he wrote just a few weeks ago and it perfectly encapsulates the way Michael lived his life. Michael’s passion for the environment was a mainstay throughout his life and those who knew him well will remember the energy and vigour with which he could speak on that and all other topics close to his heart.

Born in Denmark, Michael came to Canada with his father at the age of two. He lived in various places across Ontario and BC before settling in Vancouver for high school and university. A graduate of UBC, Michael received a BA in 1970, majoring in history and political science.

Originally a journalist, Michael wrote for the Nanaimo Daily Free Press, Vancouver Sun, and Nelson Daily News. Over the years, he authored more than 900 newspaper and online columns about sustainable lifestyles, climate change and waste reduction. In particular, Michael’s Greening Up columns were a mainstay with The Nelson Daily and were very well read throughout the West Kootenay region. When he moved to Nelson in August 1970, he quickly became involved in local environmental and political issues, including protests against a proposed pulp mill in Proctor and lobbying against the building of the Revelstoke Dam. Michael served as the BC president of the Society Promoting Environmental Conservation (SPEC) for eight years during the 1970s and 1980s. He was a founding member of the Recycling Council of BC and helped fight for the creation of the Purcell Wilderness Conservancy.

Michael was elected to Nelson City Council in 1973-74 and served for two years as one of the youngest councillors ever elected at that time. A proud Green Party member since 1993, Michael served on the Provincial Council from 2008 to 2013. He was the recycling coordinator for the RDCK for 10 years and he served as the Nelson volunteer director of the BC Lung Association from 2009 on. In everything he did, he strived always to leave the world a better place than when he entered it.

Always ahead of his time, Michael also owned and operated one of the first vegetarian restaurants in Nelson in the 1980s, Preservation House (later Roxanne’s). In that small welcoming space, he met many a lifelong friend, including his future wife, Carol. Without a doubt, his daughter Caitlin was his proudest accomplishment. Michael loved telling the story of her birth and how he carried her around the halls of the Nelson hospital proudly proclaiming “this is my daughter!” to everyone he met.

Michael was a tireless researcher and lover of knowledge; his book and music collections may rival those of some small colleges. Michael loved the written word and claimed as inspirations both poet Dylan Thomas and troubadour Bob Dylan, the latter of whom he affectionately referred to as “Bob”. While a voracious reader, it was Michael’s desire to also share that knowledge with others that set him apart. He was a mentor and friend to many in the local environmental advocacy community and will be greatly missed.

Proud of his Danish heritage (and of his cooking skills), Michael taught his wife and daughter how to say “thank you for the meal” in Danish and beamed when they would say it unprompted. A trip to Denmark in 2016 was a treasured memory for him as he reconnected with long-lost family. He would frequently tout the sustainable policies of the Danes and often compared Canada’s environmental policy with that of his home country.

Michael died on October 22, three days after suffering a massive stroke. It happened as he was walking in his beloved West Kootenay woodlands with his beloved wife.

In one of his final public letters, mentioned above, on responding to the great environmental and health crises of our time, Michael wrote, “We are neighbours and we are supposed to love one another.” As we remember him, he would want us to remember that as well.

Michael is survived by his wife Carol, daughter Caitlin, half-sister Vibeke and her husband Mogens in Denmark, step-sister Vita, and numerous other friends and family that will miss him dearly. His family would also like to extend a heartfelt thank you to all first responders, doctors and nurses in Nelson and Kelowna that helped Michael during this ordeal.

In lieu of flowers, donations can be made to Osprey’s Environment Fund.

Click the Donate Online Now button below to pay with credit card via Paypal or send a cheque to Osprey Community Foundation and note In Memory of Michael Jessen: Environment Fund in the memo line. 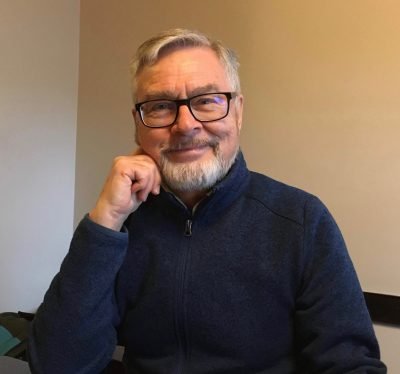 "I believe that we humans are beings created for ethical action, beings meant to step into the stream of human life and create causes, create effects, to be, to know, to love, and to do right in the human world."