In Memory of Marty Horswill

Martin (Marty) Erle Horswill was born in Nelson, BC to parents Jack and Margaret Horswill on March 14, 1944. He passed away at the age of 76 in his home on Monday, November 9, 2020 with his beloved wife, Lena Horswill, by his side. Marty is also survived by his children, Tobie Horswill (Myriam), Stephen Horswill, Andrea Gomez (Barry), Anitra Kovacs (John), and Malaika Horswill (Brent), his brothers, Bill Horswill and Mike Horswill (Judy), numerous grandchildren, nephews and nieces.

Marty spent his young years alongside his older brothers playing and swimming at the Point, attending Camp Koolaree, fishing up Duhamel Creek and singing in the Nelson Boys Choir. He adventured out to live in other places including Minnesota for post-secondary schooling, Quebec, South Sudan, and Papua New Guinea, eventually returning to his much-loved Nelson.

Throughout his life, Marty selflessly dedicated himself to causes that were close to his heart. He had a keen interest in history and learning from the past, which lead him to a focus on enhancing the lives of others, both through his profession and volunteerism. He was an unwavering advocate for change and social justice.

In the 1960’s Marty headed off to East Africa with CUSO, an adventurous start to what turned out to be a diverse career path. In 1972, he was part of a small group who started a municipal political party, The Nelson Civic Group. By 1974, he was working with the Community Resources Board (CRB) as an administrator, job placement coordinator, and manager of the Silver King Workshop. The CRB over time morphed into one of Nelson’s key non-profits; Nelson CARES. In the 1980’s, Marty returned to CUSO, working in both South Sudan and Papua New Guinea as a field director. In 1989, he became a Nelson City Councillor. His political life also included twice seeking a provincial NDP nomination and an unsuccessful run for mayor. He later worked with Forest Stewardship Council BC, a job that was a mix of fundraising, public relations and lobbying, a role which he described as the most challenging and interesting of his professional life. Marty also played a key role in the creation of the Osprey Community Foundation, the first meeting taking place in his Blewett home.

It was in 1985 at a CUSO meeting in Ottawa where Marty and Lena’s paths crossed. Both having been unlucky in love, they started a romance that lasted and grew, merging family and cultures together. Marty, a quiet thinker and an introvert, and Lena, an extrovert, complemented each other well, and admired each other’s differences. Marty adored Lena and was a loving and doting husband. They created a life together focused on family, friendship and community.
Marty developed cherished, lifelong friendships, and nurtured them with his impressive cooking and baking skills. His Yorkshire pudding, borscht, seafood crepes and huckleberry pie were some of his favourite recipes around which many wonderful memories were created. In his spare time, Marty tended to his gardens, loved a good movie with a bowl of popcorn, and was an avid reader.

Music was ever-present in Marty’s life, starting as a child with his involvement in the Nelson Boys Choir and continuing in the Nelson Choral Society and Amy Ferguson Institute, and countless other musical endeavours. More recently, he was one of the founding members of the Living Room Classics. Marty was also the producer of, and secured much of the funding for, the Nelson Community Opera production of KHAOS.

Marty was a self-taught carpenter and landscaper, designing and building his own family home in Blewett, complete with beautiful ponds and gardens. Those close to Marty were always impressed by his physical strength and stamina. When he attended to a task he was fully committed, methodical and precise. Perhaps these traits were inherited or learned from having a father and grandfather in the hardware business.

After selling the house and moving back into Nelson, Marty continued to develop the property in Blewett as a sanctuary for his family. The pond contained his much-loved Koi, a dock, sandy beach, and a raft he built for the grandkids this past summer. Marty was in the midst of completing a Japanese Pavilion in the center of the pond which his friends have lovingly committed to completing.

Marty will be greatly missed by all those who loved him and will be remembered for his kind and caring nature, and dedication to his community.

He was the guy with the twinkle in his eye, whistling or humming away. Although losing Marty has left a big hole in our hearts, we will remember him when sitting back with a hot coffee and enjoying the scenery of the Nelson Area, or while getting into a good book, listening to an opera, or engaging in community action for the better of future generations.
A small gathering to honour Marty’s life will be organized when it is safe for all of us to be together. 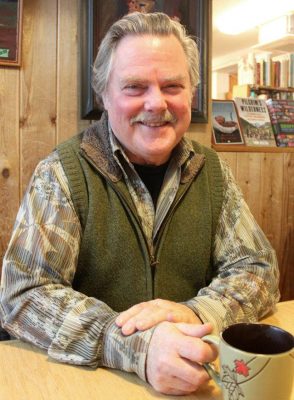 "I dream of a Nelson that combines all of our talents and resources in a whole community that's greater than the sum of its parts. "